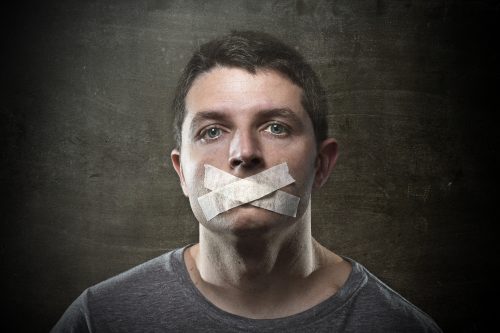 This article discusses the way the compromised World Health Organization and its vested interest partners have gained the ability to deprive not only citizens but world leaders too of their right to free speech. This article reveals the gargantuan size of this incredible censorship network developed with millions of dollars of grants from tech giants and supposed philanthropists. We reveal the ever-growing nature of this censorship network subduing all questioning voices, also preventing people from voicing their opinions or protesting as the world is silently pushed into poverty.

Have you noted the way all Internet and social media searches lead to Rome lately, painting the pretty picture of a united world wanting nothing but to continue to stay shut down? I started investigating when I first noticed that things just didn’t quite add up, when millions of jobless Americans have silently been arming themselves and crime rates and alcoholism have shot up.

Would Trump have been next… if he’d resisted shutting America down?

I was puzzled by the questions my mind could not dismiss, when I stumbled across several articles lambasting Brazil’s President Jair Bolsonaro for “endangering public health,” portraying him as a crazy “conspiracy theorist” recklessly ignoring “medical experts.” Time reports that Bolsonaro even risked prosecution by the Supreme Court for conflicting the recommendations of the international health authorities. Although not yet prosecuted, if Bolsonaro were to issue any “official decrees that counter broad lockdown guidelines,” this “could tread into territory that requires legal evaluation.” Time goes on to state that the president of Venezuela had also been censured by social media. Business Insider reports that Twitter deleted a message by Rudy Giuliani for “spreading coronavirus misinformation” and temporarily suspended his account. Actress Alyssa Milano and David Clarke are among the celebrities whose Tweets have also been removed, reports The Verge.

An article by Slate speculates if Trump will soon meet the same fate, calling Bolsonaro a “right wing populist” who “has preached and pushed conspiracy theories since taking office some 18 months ago and has, like Donald Trump has at times, cast doubt over the legitimacy and seriousness of the pandemic. The title of their article includes the phrase “Could Trump Be Next?”

“Misinformation” and “conspiracy theories” flagged by the World Health Organization

Twitter explains their rationale for deleting the Tweets in their Covid-19 update published on their own website, stating that they’ve broadened their “definition of harm” to include “content that goes directly against guidance from authoritative sources of global and local public health information.” Twitter adds that “we will enforce this in close coordination with trusted partners, including public health authorities and governments, and continue to use and consult with information from those sources when reviewing content.”

“A Facebook spokesperson confirmed to Recode that the company would remove false claims and conspiracy theories flagged by world health organizations that have been shared by politicians or elected officials.”

For those interested in seeing, the Recode article above links to the related post on Facebook by its co-founder Mark Zuckerberg. Towards the end of the article on Recode, we are told that “Every social media company Recode reached said they were working to reduce the impact of false information about the coronavirus in some way, to varying extents.” Facebook further adds in another article on its website:

“We’ve removed harmful misinformation since 2018 … we remove based on guidance from the WHO and other health authorities. …

Millions of Dollars of Grants to Grow the Censorship Network

“We continue to work with our network of over 55 fact-checking partners covering over 45 languages to debunk these claims. To support the global fact-checking community’s work on COVID-19, we partnered with the Independent Fact-Checking Network to launch a 1 million grant program to increase their capacity during this time.”

Facebook’s link pointing to information about the 1 million grant program mentioned above unfortunately does not disclose who’s provided them these funds, but states “The fact-checking community has been working very hard, day and night.”

Googling “fighting coronavirus misinformation” has quickly uncovered a much larger grant mentioned in an article on Google’s own blog stating that Google has provided “$6.5 million in funding to fact-checkers and nonprofits fighting misinformation around the world, with an immediate focus on coronavirus.” This article explains the gargantuan extent of the censorship network formed by this 6.6 million dollar grant:

“… the nonprofit organization Google News Initiative (GNI) is providing an online resource hub, dedicated training and crisis simulations for reporters covering COVID-19 all over the globe. … using its extensive CrossCheck network to help newsrooms respond quickly and address escalating content that is causing confusion and harm… As fact-checkers address heightened demand for their work, we are providing immediate support to several organizations. Full Fact and Maldita.es will coordinate efforts in Europe focused on countries with the most cases (Italy, Spain, Germany, France and the United Kingdom) to amplify experts, share trends, and help reduce the spread of harmful false information. In Germany, CORRECTIV will step up its efforts to engage citizens in the fight against misinformation…”

The article continues on and on to explain the tremendous extent and outreach of Google’s efforts.

This is the reason why none of us are heard complaining in a shut-down world diving headlong into unfathomable poverty at an accelerating rate, whose descent is solely controlled by the tech giants voicing the WHO’s interests and no one else’s.

The censorship of the Internet is also being fueled by certain “Top Trump Administration Aides” in the White House who have been advising the need to keep the country shut down until a vaccine is found. To uncover these censorship efforts coming from the White House, it suffices to look at the Washington Post article titled “White House asks Silicon Valley for Help to Combat Coronavirus, Track Its Spread and Stop Misinformation.” The article states:

“The White House on Wednesday sought help from Amazon, Google and other tech giants in the fight against the coronavirus…

The requests came during a roughly two-hour-long meeting between top Trump administration aides, leading federal health authorities and representatives from companies including Cisco, Facebook, IBM, Microsoft and Twitter … Three participants described the phone-and-video conversation on the condition of anonymity because the session was private. Most tech companies in attendance either did not respond or declined to comment.

During the session, which participants described as a collegial brainstorm, White House officials urged the tech industry to coordinate its efforts to stop the spread of coronavirus conspiracy theories on major social media sites, urging the companies to swap intelligence about harmful hoaxes before they go viral, the three participants said.”

The U.S. is not the only country whose compromised officials have been helping censor all disagreeing voices. BBC News reports that “In the UK, a ‘rapid response unit’ within the Cabinet Office has been established to work with the social networks to remove fake news and harmful content.”

Not Only the WHO is Compromised but also the CDC

The compromised nature of the WHO was first announced by Fox News reporter Tucker Carlson, who announced it was under investigation. It was almost comical to see CNN for once agree in a February 16th 2020 article on the subject. In this CNN article, when one scrolls down all the way to the subheading “Mixing Health with Politics,” one reads about another article on the website of the University of Rochester, which further exposes the W.H.O.’s extensively compromised nature. This linked article mentions the work of Theodore Brown, “a University of Rochester professor emeritus of history and public health sciences, who has co-authored a new comprehensive history of the World Health Organization, looking at how world politics have shaped the institution and its mission.” The article mentions the authors pointing out how the corruption surfaced, stating

“at the end of the 1980s, when the agency increasingly came under widespread criticism from many sides – health policy experts, international entities such as the World Bank, and specific countries – for its inefficiency, lack of transparency, politicization, and ultimately irrelevance.”

Going back to the CNN article on the WHO, it reports that “The UN agency relied on funding and the cooperation of members to function, giving wealthy member states like China considerable influence.”

When we know that the voice of the WHO can’t be trusted as representing the genuine “voice of science,” can we trust the voice of the CDC? For the answer, it took only a few minutes to see the 2016 article by The Hill titled “The CDC is Being Influenced by Corporate and Political Interests.” This article explains the unsuccessful conscientious efforts of a group of more than a dozen senior CDC scientists who “have reportedly lodged an ethics complaint alleging the federal agency is being influenced by corporate and political interests in ways that shortchange taxpayers.” The Hill states that this group of concerned scientists “put a list of complaints in writing in a letter to CDC Chief of Staff and provided a copy of the letter to the public watchdog organization U.S. Right to Know (USRTK). The members of the group have elected to file the complaint anonymously for fear of retribution.”

The Ever-Growing Nature of the Censorship Network

But China is not the greatest influencer of the WHO as has been covered in the Politico article titled “Meet the World’s Most Powerful Doctor: Bill Gates,” with the subtitle “The Software Mogul’s Sway Over the World Health Organization Spurs Criticism about Misplaced Priorities and Undue Influence.” This article states:

“Some billionaires are satisfied with buying themselves an island. Bill Gates got a United Nations health agency in Geneva. Over the past decade, the world’s richest man has become the World Health Organization’s second biggest donor, second only to the United States and just above the United Kingdom. This largesse gives him outsized influence over its agenda, one that could grow as the U.S. and the U.K. threaten to cut funding if the agency doesn’t make a better investment case. The result, say his critics, is that Gates’ priorities have become the WHO’s.”

USA Today lists Microsoft’s name among the names of the tech giants Twitter, Facebook, Google, YouTube and Reddit who have given a joint statement which “makes a plea to other companies to join them in helping to combat ‘fraud and misinformation’ during the coronavirus pandemic.”

Thus this ever-expanding censorship network will continue to grow and strengthen each day, letting the world’s most intelligent mastermind(s) be the only united voice heard online, masquerading as the unquestionable voice of “medical advice” to lead the world wherever it wants to. This compromised united voice has silenced everyone else online at the most opportune moment which also benefits China, right after President Trump started easing off America’s reliance on the Chinese companies. No wonder the only voice we’re allowed to hear online has found so many supporters as Trump’s political opposition also greatly benefits from the shutdowns, as each passing day creates millions of more jobless and outraged Americans turning against the Trump Administration, muted as Trump’s chances of re-election silently diminish. Almost everyone benefits except the world population silenced while being impoverished.

No wonder both China and Bill Gates have thought of targeting and succeeded at compromising the W.H.O. at the same time, great minds do seem to think alike…

Grossly exaggerated Covid-19 models falsely predicting 2 million Americans dying, touted by a supposed top medical expert recommending America to stay shut down for 18 months until a vaccine is found… Otherwise we’d all be “putting a dollar value over lives” we don’t want “blood on our hands!”

Will the emerging voice of real science be able to outsmart the world’s greatest mastermind(s) and their collaborators before world governments start spiraling into bankruptcy? Only time will tell.

3 thoughts on “The Incredible Extent the Internet’s Being Censored”