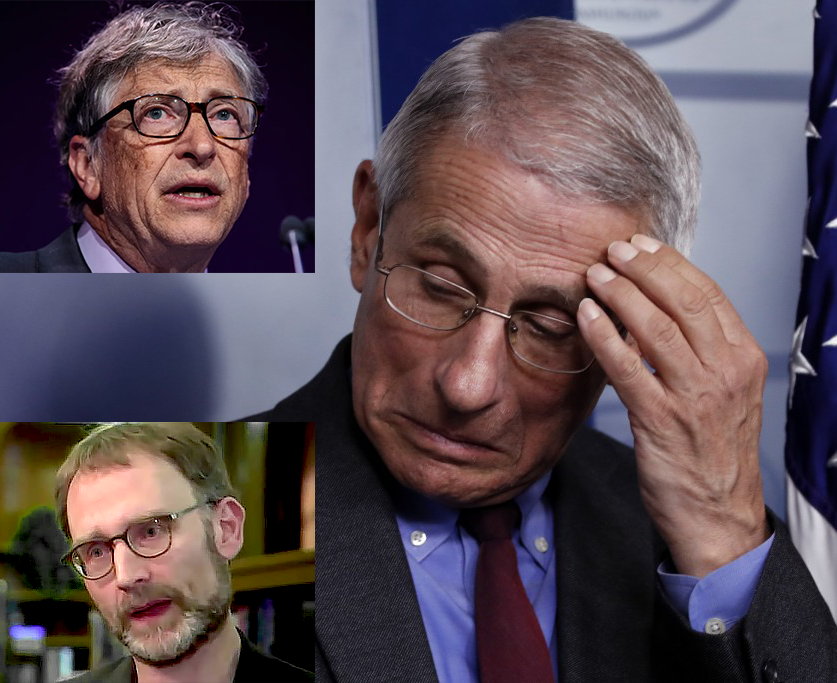 Meet Dr. Ferguson who ordered the world to stop

If the voice of science is to determine national policy, it should be devoid of all conflicts of interest, wouldn’t you agree? This has unfortunately not been the case…

“Vaccines are one of the best investments that we can make in the future,” explained philanthropist Bill Gates to Reuters in their May 2011 article titled “Gates Says Vaccine Investment Offers Best Returns.” The article also states:

The Gates Foundation spends about $2 billion in grants each year for global health programs to tackle AIDS, malaria and other diseases, funding both research and delivery of medicines.

Which Key Opinion Leader wouldn’t have much to gain from winning the favor of the world’s greatest grant supplier?…

On 04/02/2020, Nature published a News Feature that identifies the English professor Dr. Niel Ferguson as the man who almost single-handedly shaped the world’s response to COVID-19, causing the shutting down of the world’s economy. The information below reveals Ferguson’s entanglement with the compromised World Health Organization literally owned by the Bill and Melinda Gates Foundation, currently under congressional investigation by the U.S. Government for mismanaging and covering up the spread of the coronavirus. This article will also demonstrate the similar entanglement of Dr. Anthony Fauci with the Bill and Melinda Gates Foundation. We will explore if vested interests may have influenced the way Fauci has embraced Fergusson’s inaccurate model recommending social distancing measures as the only viable solution for COVID-19 until a vaccine is developed in about 18 months.

“Research does not get much more policy-relevant than this,” states Nature’s News Feature titled “Special report: The simulations driving the world’s response to COVID-19,” referring to Dr. Ferguson’s mathematical model created in Imperial College London. The predictions of the model are summarized as being more than 500, 000 deaths for the U.K. and as many as 2.2 million deaths for the U.S. without social distancing measures.

Dr. Ferguson and the WHO

The answer to the above question is literally a yes, as Ferguson was the head/director of an institution called The WHO Collaborating Centre for Infectious Disease Modeling. This is revealed in a deleted webpage that was still cached by Google at the time I saw it, please find the forensically viable saved version here.

Searching the website of Imperial College London where Ferguson works pulls the original article about Ferguson’s model that Fauci pushed on the U.S., which includes The WHO Collaborating Centre for Infectious Disease Modeling among its authors (stated after the list of authors). It recommends ‘mitigation’ or the Chinese lockdown model of ‘suppression’ as the two strategies to respond to the pandemic, where suppression “will require the layering of more intensive and socially disruptive measures,” which, Ferguson claims, must continue for at least a year or a year and a half! In exact words, the paper states that the intensive socially disruptive measures must:

“be maintained – at least intermittently – for as long as the virus is circulating in the human population, or until a vaccine becomes available. In the case of COVID-19, it will be at least a 12-18 months before a vaccine is available.”

At another point in his paper Ferguson states the above more explicitly, also scaring the public that the spread of the virus will rebound without waiting for the vaccine:

The major challenge of suppression is that this type of intensive intervention package – or something equivalently effective at reducing transmission – will need to be maintained until a vaccine becomes available (potentially 18 months or more) – given that we predict that transmission will quickly rebound if interventions are relaxed.

In his article, Ferguson also recommends very large-scale testing and contact tracing methods to be enacted, this time praising South Korea’s response. He explicitly recommends privacy concerns to be overcome in tracking everyone’s interactions with everyone else in society. He then scares the world, claiming that transmissions will rapidly rebound if suppression is not maintained. These points are stated as follows:

“As case numbers fall, it becomes more feasible to adopt intensive testing, contact tracing and quarantine measures akin to the strategies being employed in South Korea today. Technology – such as mobile phone apps that track an individual’s interactions with other people in society – might allow such a policy to be more effective and scalable if the associated privacy concerns can be overcome. However, if intensive NPI packages aimed at suppression are not maintained, our analysis suggests that transmission will rapidly rebound, potentially producing an epidemic comparable in scale to what would have been seen had no interventions been adopted.”

U.S. governors are still trying to figure out how to fulfill these requirements of the testing and contact tracing of entire populations in ways that will not liable them of negligence, as job losses continue to soar and America races headlong into a second Great Depression.

If China has masterminded all of the above, one almost feels inclined to congratulate it.

The Imperial College of London Ferguson works for has not only housed the WHO Collaborating Centre for Infectious Disease Modeling whose website has now been deleted, but it continues to house another organization called The WHO Collaborating Centre for Public Health Education and Training. The existence of such a center in the college where Ferguson works indicates the extent to which China fans Ferguson and the WHO may have collaborated in educating and training the public on responding to COVID-19.

The road to hell being paved with… good intentions?

Perhaps God will only know whether or not Gates may have masterminded the above. Too bad if he may be a philanthropist whose good name has been sullied by greedy researchers trying to win the favor of the world’s greatest provider of grants and donations. CNBC reports that “Conspiracy theories falsely linking Gates to the coronavirus’ origins in some way or another were mentioned 1.2 million times on television or social media from February to April,” as determined in an analysis by The New York Times and Zignal Labs. But Gates has succeeded at ingeniously eradicating this problem, having partnered with other tech giants to form an ever-growing censorship network aggressively removing all “conspiracy theories” and “misinformation” flagged as such by the WHO and its partners.

It does not matter whether Gates may be the most angelic philanthropist on Earth or Lucifer in disguise, the only thing that matters is that world governments should refuse to hand an immeasurably wealthy man completely impoverished nations. The danger of doing so is further demonstrated in the two studies below.

The world had been warned years ago by the findings of major studies such as the one titled “Philanthropic Power and Development, Who shapes the agenda?”, which has been covered by the Guardian in their article “Are Gates and Rockefeller using their influence to set agenda in poor states?” This article criticized Gates for the possibility that his interests may override those of the UN’s. But instead of backing down when faced with such criticism about conflicting with the UN’s interests, Gates has charged ahead fully and effectively bought out the WHO which is a UN agency.

Also see this 2014 study titled “Philanthrocapitalism Past and Present: The Rockefeller Foundation, the Gates Foundation and the Setting(s) of the International/Global Health Agenda,” whose abstract states that their analysis concludes

the Gates Foundation’s pervasive influence is nonetheless of grave concern both to democratic global health governance and to scientific independence—and urges scientists to play a role in contest- ing and identifying alternatives to global health philanthrocapitalism.

It seems that in a matter of months, the biggest gap between the distribution of wealth in the world will be allowed to occur, with the world’s wealthiest man coming out richer by many orders of magnitude, and the entire world completely impoverished. This same man will also have gained the power to trace where everyone goes in the world, in addition to having already seized the power to censor all free speech on earth.

There seems to be nothing anyone can do about publicizing the sheer stupidity of letting the above take place. Everything I try posting online very quickly vanishes.

And what could have motivated Dr. Fauci to strongly keep pushing Ferguson’s model on President Trump? Could Fauci have somehow known in advance that he would end up in a partnership with Gates to develop the COVID-19 vaccine?

Dr. Fauci is the director of The National Institute of Allergy and Infectious Diseases (NIAID), which has in 2010 partnered with the WHO, Bill and Melinda Gates Foundation and UNICEF to form the Decade of Vaccines Collaboration whose Leadership Council includes Anthony Fauci. This has been announced in a press release found on the website of Bill and Melinda Gates Foundation. This press release states:

The Decade of Vaccines Collaboration expects to complete its work by mid-2012.  At that time, all vaccine stakeholder groups will be responsible for implementing the action plan.

I have unfortunately not been able to uncover who the stakeholders mentioned above happen to be. 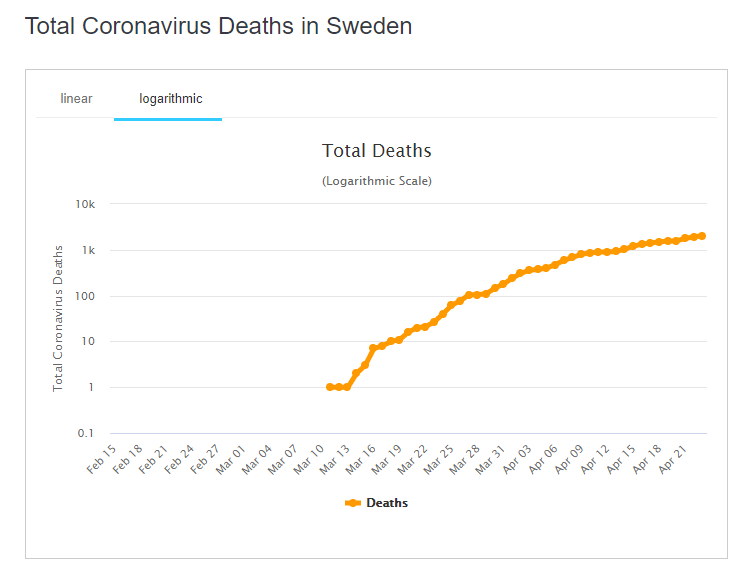 Sweden seems about to get to the other side of the crisis without having shut down its economy (image credited to Worldometer). But Fauci would be failing his collaborators if what’s happening in Sweden were to occur in the U.S. and other nations in the world, reveals an article in FiercePharma. This article explains that the team including Fauci is having trouble finding a pharma partner to manufacture the vaccine, because all potential pharma partners are scared that the outbreak may not last long enough, as has happened in the past with the case of the Ebola crisis and Zika outbreak. But Fauci’s efforts to delay reopening the economy has succeeded at convincing Johnson and Johnson to chip in, which is “readying production facilities so that it can ‘meet global health needs,'” the article reports.

As my efforts may have demonstrated, for as long as researchers are allowed to accept funding from private parties, their voices can’t be taken to represent the genuine voice of science. Other articles in this blog further demonstrate the dire reality of this conclusion.

The cesspool of vested interests demonstrated necessitates ceasing to follow the guidelines coming from the compromised WHO, Dr. Ferguson and Fauci. To see my suggestions for how to re-open the economy immediately while protecting the at-risk population, please see this article which also delves into demonstrating the actual death rate from COVID-19. This article lays out the way the grossly exaggerated death rates of Ferguson’s model have recently gotten a lot of flak from prestigious Stanford University professors. Please note in this article the paper by Stanford Professor Dr. Ioannidis titled “Coronavirus disease 2019: The harms of exaggerated information and non-evidence-based measures.”